Jack Russell terriers are a precious breed in the dog world that we all adore. These dogs tend to be energetic, loyal, and happy beings that make their presence a blessing.

Although adult Jack Russell terriers and terrier puppies are generally healthy, as is the case with all other dog breeds, there are some common health problems with Jack Russells.

If you eventually learn to analyse any change in your dog’s anatomy or behaviour, you will most likely spot any health issue or condition easily and get medical attention early. However, remember to never self-diagnose or treat any condition you may suspect your dog has without a vet’s advice or check-up. 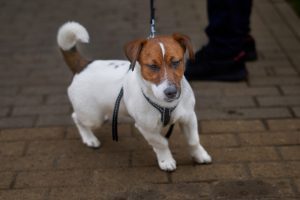 Primary Lens Luxation (PLL) is an inherited and painful eye disorder that is caused by the weakening of zonular fibres, which leads to the eye lens shifting from its normal position. This shifting then causes inflammation and glaucoma.

PLL can appear suddenly from a base change mutation in the gene ADAMST17. And if left without treatment, it can lead to blindness.

Symptoms of PLL in Jack Russells include:

Fortunately, testing is available for PLL to identify the condition in affected dogs. Moreover, this testing also helps good Jack Russell breeders identify mating the breeds that are more likely to produce offspring with PLL.

The thinning of the heart muscle can affect the heart’s ability to pump blood efficiently, resulting in congestive heart failure. The condition in the early stages may be present in some dogs without any symptoms. So, make sure to visit your vet for a regular check-up every once in a while.

Symptoms of Cardiomyopathy in Jack Russells include:

Legg-Calve-Perthes is a common health problem with Jack Russells and in terriers. The condition occurs when blood supply to the femoral head of the joint of the dog’s hip is disrupted. This disruption results in degeneration of the bone and can cause it to lose shape.

The condition also causes the Jack Russell terrier severe pain while walking or running. Legg Perthes, however, is an inherited disorder that appears in terrier puppies around the age of 6-12 months. Luckily, the condition can be treated through surgery by removing the head of the femur, leaving the muscles to form a false joint for its hip.

Symptoms of Leg Perthes in terriers include:

When a dog suffers from Luxating Patella, the dog’s patella, also known as a kneecap that is located near the thigh bone, dissociates from its normal position. The condition can appear in one or both legs.

Common symptoms of Luxating Patella in Jack Russells include:

Pancreatitis is a condition that is also found in humans. The condition occurs when someone’s pancreas is inflamed. The pancreas has an important function in a human’s and dog’s body – the pancreas produces enzymes that are required to digest food and also regulate hormonal functions.

Pancreatitis can cause swelling and severe pain. Other symptoms of this common health issue in a Jack Russell include:

The cruciate includes two bands of fibrous tissue located in each knee of a dog’s body. They join together the femur and the tibia (bones around the knee joint) so that the knee does its job as a joint efficiently.

The condition tends to be common among Jack Russell terriers. However, it can, fortunately, be treated effectively often by surgery.

Other treatments such as pain relief drugs, supplements, and weight management are also common.

This overproduction can be dangerous as it puts the dog at risk for certain health conditions such as kidney damage and diabetes. The disease can also be life-threatening.

Symptoms of Cushing Disease in Jack Russells usually include:

The condition is mostly treated with medication that helps reduce the production of cortisone. But the only way to cure the disease is to remove the tumour on the glands. However, surgery can be complex and risky. Therefore, vets prefer to treat the condition with medication.

Portosystemic Shunt (PSS) is a liver disorder that disrupts the blood flow in a Jack Russells liver. Symptoms include:

No pet parent wants to experience their canine friends getting sick. However, as unfortunate as it is, health issues in terriers exist and can sometimes be common health problems with Jack Russells. But since treatments are widely available, you do not need to be concerned.

However, as a responsible pet parent, make sure to get your four-legged BFF regular appointments to the vet to diagnose and treat any health condition in its early stages.

Author Bio Jo Williams is a freelance writer from London, England. There is nothing she loves to talk about more than dogs, good food and travelling. Coming from a family of JR owners, Jo shares generations of tips and advice for looking after these mischievous little dogs.

Boost your dog’s diet: 8 Healthy herbs for dogs that you can grow in your garden

Does your dog have separation anxiety?